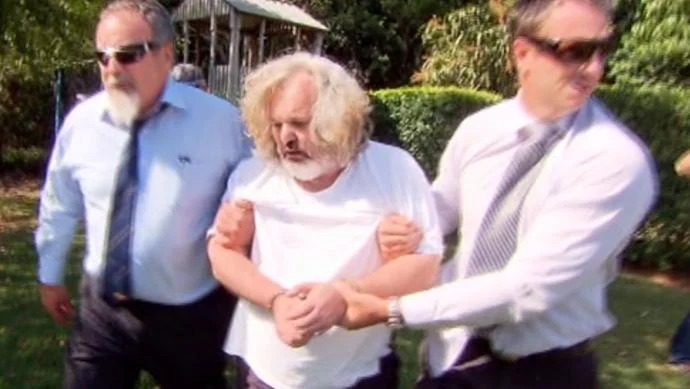 IFW’s cyber investigation team was instrumental in the arrest of serial con man, Peter Foster yesterday. Foster has been on the run from police for the past year. He was listed on Interpol’s most wanted list and was rumoured to be living on the NSW north coast. Detectives from Byron Bay, acting on a tip off from IFW investigators, arrested Foster around 3.30pm in a rented luxury home in Ewingsdale.

IFW worked in close coordination with Nine Network’s A Current Affair to track Foster’s location and to prove his alleged involvement in the online sports betting company, Sports Trading Club. STC has milked investors of tens of millions of dollars in Australia. Foster, using the alias, Mark Hughes, acted as the company’s Australian sales manager and liaised directly with numerous investors by telephone, making no attempt to disguise his distinct voice.

STC purported to be based in the United Kingdom with extensive connections to sources within the sports prediction markets. But investigators revealed that some of the figures and results being published by STC were fraudulent and were being manufactured to create an illusion to investors. IFW Executive Chairman, Ken Gamble, headed the investigation into STC’s activities and the whereabouts of Foster.

Mr Gamble said today “STC gave the appearance that they had bet on major sporting games and won large amounts of money but, in fact, in some cases there was no betting at all, they would simply take the results of the game, claim they placed a large bet on it, and then publish the winning results to dupe their investors”.

IFW’s investigations uncovered Foster using the alias name of Mark Hughes and acting as the Australian sales manager for STC. Mark Hughes was clearly the mastermind of Sports Trading Club, as they appeared to make all the decisions regarding the payment of dividends and refunds. “Legal advisors allegedly employed by STC were found to be fictitious names and it was most likely Foster writing the emails”, Mr Gamble said. “Mark Hughes often threatened legal action to those STC investors who claimed their money back after having second thoughts about the legitimacy of STC’s operation”.

In early October 2014, IFW started to move in on Foster when investigators received intelligence that Foster was hiding on a property in the area of Ewingsdale. There had also been some reported sightings of Foster in Byron Bay. Local detectives were alerted that the international man of mystery and self confessed white-collar criminal could be in their local community. The reports were accurate but Foster remained elusive, going to great lengths to cover his tracks. He used numerous mobile phones registered in the names of associates and their family members. His latest mobile number traced to 19 year old Bradie Emberg who was found to be the son of Foster’s long term girlfriend, Liana Emberg of the Gold Coast. Mr Gamble said that Foster remained in close contact with Liana Emberg after going on the run and that she continued to assist him to avoid arrest by police.

During a recent surveillance operation, Liana Emberg’s vehicle was seen driving to Magnolia Place, Ewingsdale to collect Foster’s mother after a weekend with her fugitive son. In less that 24 hours, investigators learned that Foster had rented a luxury furnished home under a false name and using false identity documents from the United Kingdom.

Investigators from IFW’s surveillance squad were able to pinpoint a luxury home set in the rural hinterland of Ewingsdale as the hide-out of Peter Foster and the headquarters of Sports Trading Club. When police and a film crew from A Current Affair raided the property, Foster immediately tried to escape by running through a neighbour’s house only to run straight into a barbed wire fence where he dropped to the ground. He was immediately arrested and given medical treatment soon after for breathing difficulties. He was led away from the area in handcuffs and said very little during the ordeal other than asking for a drink of water. IFW investigators saw a number of Sports Trading Club emails on computer screens located in the office of the home.

Foster’s arrest and his involvement in the operation of the Sports Trading Club will be disturbing news for investors who have invested millions into the company and were hoping for the big returns that STC promised in their slick sales and marketing campaigns. IFW investigators believe that a significant amount of the money may have been sent to offshore accounts but it is very unlikely that the money was ever traded on any sporting events as claimed by STC. It is more likely to have gone to foreign bank accounts controlled by Foster and his accomplices.